Undici in partnership with Puma Eyewear presents #NoCage, a collection of 12 stories of past and contemporary athletes that have changed the history of sports, overcoming the barriers and obstacles in their path thanks to determination and willpower.

Yusra Mardini has the clean face and wily, shrewd gaze of someone who has been through a lot. Yusra is only eighteen, but has been forced to confront the consequences of the Syrian conflict since she was a child. It is as if her real age does not count, like a fruit that matured more quickly than most, Mardini blossomed ahead of time, and during the upcoming Olympics in Rio, Mardini will race under the banner of the Refugee Olympic Team, a welcoming gesture of hope created by IOC president, Thomas Bach. As we know it, the story of Yusra began exactly a year ago, and what we know about her is only based on the truth of her own words as before August 2015, she was just another one of the millions of Syrians trying to survive. This fact takes us back to last March, when it was estimated that of the 24.5 million people living in Syria before the outbreak of the civil war, only 17 million remain in the country. And of those remaining, the United Nations estimates that 13.5 million are in need of humanitarian assistance and 4.5 million are trapped in hard to reach areas or perpetually under siege.

When in August of 2015 Yusra decided to escape from Syria, running away from a cloud of horror and death, she immediately shed the carefree guise of a defenseless teenager to dress as a woman who follows the ideal of self-determination. The second of three daughters, Mardini had always lived at home with her parents, was enrolled at a club gymnasts and loved swimming from the day she started. Hers was a life built around the rules of normality, far from exciting stories, but with the arrival of civil war and instability Yusra conflict began to percieve her existence as a non-life. It was as if a curtain of despair clouded the pure simplicity of that daily routine. Then, following the bombing during the massacre of 2012 in Daraya, which saw their home reduced to rubble, the entire Mardini family was forced to move. The roof of the pool in Damascus where Yusra used to train – being the daughter of a swim coach – had been completely ripped off during an attack in which two of her companions died. She could still see the clean water of that pool, but would never again be able to dive in. When she learned that some of the soccer players of the Syrian National team had been killed during a bombing, Yusra decided she could no longer remain in Damascus. She could no longer continue to live that non-life without the fear of succumbing to it, both as a woman and an athlete, but as she fled the world’s oldest city, she knew well that there was no certainty she would survive: “Maybe I could have died along the way, but I was almost dead in my country anyway. It was the only thing I could do”.

Four years have passed since the beginning of the civil war when Yusra – just 13 years old at the outbreak of the conflict – and her older sister, Sarah, left Syria with two of their father’s cousins and other refugees. Having said goodbye to their family, who would follow their journey by GPS, they tried to make their way from Damascus to Beirut, Lebanon. From Beirut, they needed to reach Istanbul where they were to wait for the smugglers and a group of about 30 refugees. Taken to Izmir in Turkey, they spent four nights in a jungle without food and water, followed by gunmen; little did they know their journey would last nearly a month. They then waited for the boat on which they were to cross the Aegean from Turkey to Greece, from which they would enter the warm heart of central Europe, but after only thirty minutes, once they reached open sea and wild waves relentlessly slammed into the boat, the engine that was pushing them towards the Greek coast stopped.

The 6 person inflatable dinghy was packed to the gunnels and stopped moving, rolling heavily in the swell, but with over 20 people on board it soon lost stability and began to take on water. Yusra's elder sister, Sarah, did not want her to dive into the water, but can you really ask a swimmer not to face a challenge when she is in her element? “I thought it would be absurd to drown in the sea, because I'm a swimmer,” says Mardini, who learned to swim when she was only three years old. And so it was that the two sisters and a third young woman, clinging to ropes attached to the boat's sides, started to swim, pushing the vessel towards the shore. While the radio echoed the Turkish and Greek authorities’ orders that the boat turn back, between one stroke and the next, Yusra smiled at a frightened child with whom she had shared the little space onboard. Three and a half hours of swimming and tense muscles, with one hand clinging to the boat and the other pushing water, “My sister and I continued to swim breaststroke with one arm and leg while the rest of our bodies were tied to the boat, but half an hour from the coast I was exhausted. I came up and began to feel cold, watching the sea, and I was weak”. From that day on Yusra learned to hate the open sea.

When they reached the shore, exhausted, she could not do nothing but pray. The restaurants nearby prohibit them from entering, dressed in soaking wet jeans and t-shirts, with their cell phones, money and passports in plastic bags, they were all the same. “A lot of people think that the refugees do not have a home, that they have nothing. Instead, we are just like everyone else; we were not living in a desert”. Between the landing on the shores of the Greek island Lesbos, and their arrival in Germany, Yusra and her family would cover over 1000 miles, travelling through Macedonia, Serbia, Hungary and Austria – on foot, by train and by bus – before arriving in Munich and then Berlin. Twenty-five days after the fear of not making it, they were on the verge of hope. “I knew, finally, that my journey was over.”

Yusra’s first home in Germany is a refugee camp on the outskirts of Berlin, in the Spandau district, where she arrived in October. Mardini tells of how, thanks to an Egyptian translator – one of the first people they was able to interact because of the language – she came into contact with the Wasserfreunde Spandau 04, one of the oldest swimming clubs in Berlin club with a pool that was built by the Nazis for the 1936 Olympics. After noticing the technique of the young Syrian, the club agreed to allow her to train at its facilities. Sven Spannerkrebs is the coach who has followed Yusra since she arrived in Germany, giving her a mission: the Tokyo 2020 Olympic Games is their shared goal. It followed that in March, when the International Olympic Committee announced its intention to host an Olympic team for stateless persons to “give hope to all refugees in the world”, Berlin was left with a certainty: a young girl who had made as much progress as Yusra had to go to Rio. Spannerkrebs, the coach who follows the Syrian swimmer, threw the girl’s phone into a fridge. There were just too many journalists calling from every corner of the globe. Mardini was already a phenomenon even before she had made her début in competitive swimming. But Yusra is not afraid of the pressure and the natural expectations that such an intense story create: “I want to be a source of inspiration for all. Deep in my heart, I want to be able to help all refugees”.

In mid-June, just two months before the Olympics, she received an e-mail from the IOC. Incredulous, and frightened by the content of that message, Yusra came to the brink of tears as she understood that she would be part of the Olympic village – a stateless refugee who had found asylum on the other side of the world to survive. Normally, this would be transformed into a tale grafted on dreams come true; a story based on the clichés in life that surprise one, bringing unimaginable joys after having looked death in the eye. Instead, Mardini arrived in Rio thanks to her persistence, and rational idea of exactly what the word sacrifice entailed. Of course, the system of elite sports schools made available by Germany and the support of the Olympic Committee, which will bear the costs of transport, uniforms and coaches, have provided incomparable support for Yusra. Indeed, that young girl with that serene, reassuring expression, who found her own escape in swimming, is destined to represent a team in Brazil.

Arriving in Germany at 17, Yusra has since improved her English and started to learn German. Watching her interviews of a year ago, one feels the tenderness of a child already forced to think like a woman. She is certain and resolute when she states that “with two words in German and three in English I am able to make myself understood by all”. Last year she took to training hard, ten weekly workouts in the water and five on land. With improvised extra sessions at five in the morning. To qualify for the Olympics, she had improve on her times. If the qualifying standard for the 200m freestyle was set at 2:03.13, Yusra’s personal time was between 2:11 and 2:15, and she would have to fill a potentially insurmountable gap. Probably for this reason, she has focused on the 100m, despite the fact that a medal in Rio is out of her reach, with a 1:08 personal record in the 100m butterfly and 1:02 in the 100m freestyle – respectively nine and eleven seconds behind the Olympic qualifying times – Yusra only wishes only to improve her own times, her personal apogee. Spannerkrebs, her coach, describes her as stubborn and capable, and we might perhaps expect something greater from her in four years, in Tokyo, when Yusra’s still immature physique will have blossomed like that of a Damascus rose. In the meanwhile, the Mardini sisters have been reunited with their mother, father and two younger sisters, who were all granted temporary permits so that the family could meet in Berlin. 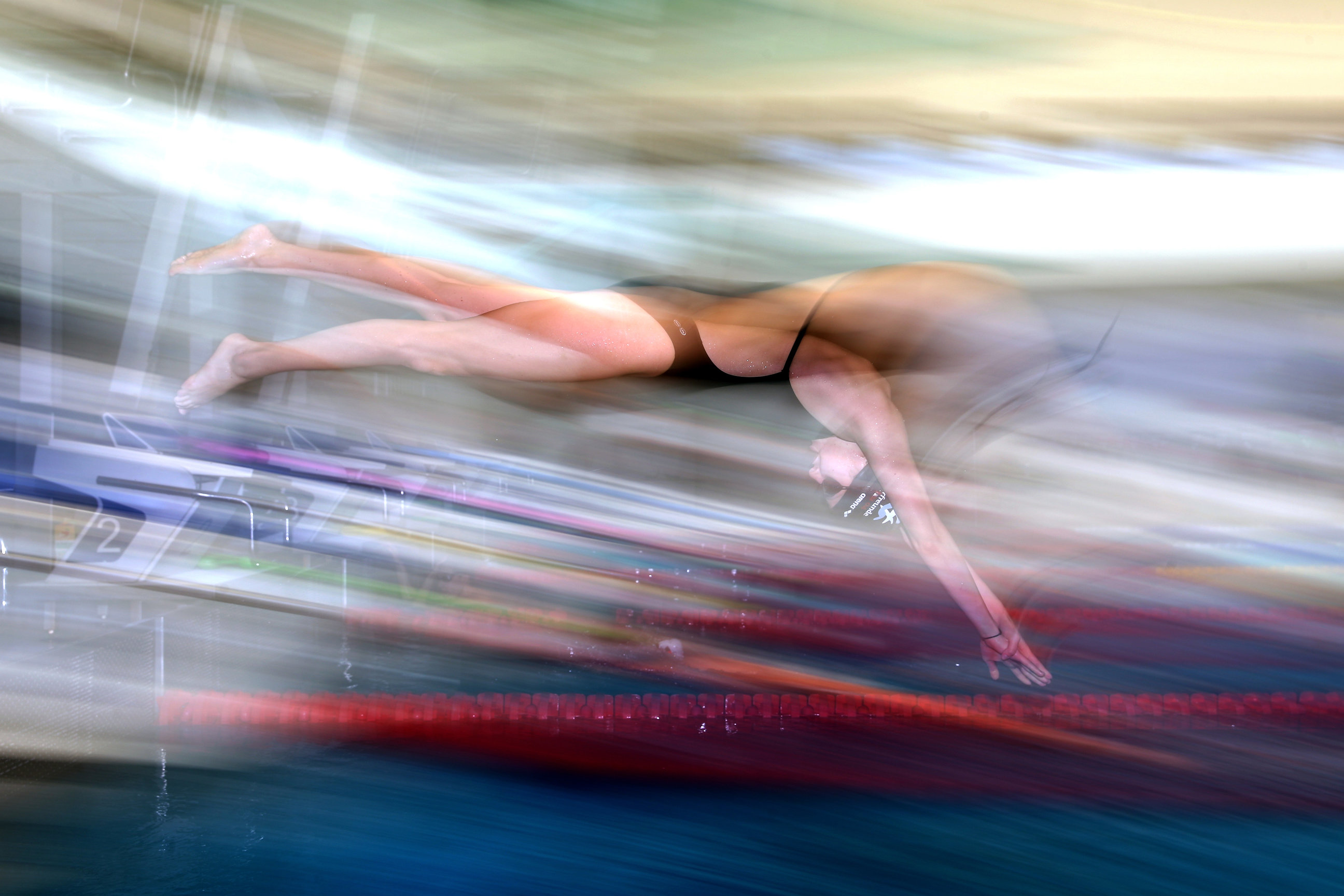 Yusra Mardini of Syria during a training session at the Wasserfreunde Spandau 04 training pool Olympiapark Berlin on March 9, 2016 in Berlin, Germany (Alexander Hassenstein/Getty Images for Ioc)

Finally Yusra can live life like a normal teenager, sharing selfies, motivational quotes and phrases that appear on her Facebook fan page or her Instagram profile, where she has publically expressed how much she is looking forward to meeting some of the athletes who have been her lifelong idols; especially Michael Phelps. I do not think we are interested in knowing whether or not Mardini will win a medal in Rio – when she races in the 100m butterfly on August 6th and the 100m freestyle on the 10th –, but while we are certainly the first to want to see more of her friendly young face, it is more important that we still see the humble sincerity of the wide smile and sharp, intelligent gaze of someone who knows so much about life.